Preparations continue this week for the forthcoming CCA exhibition ‘What We Have Done, What We Are about to Do’ with items being drawn out and earmarked as possible pieces for public display.  The aim of the exhibition is to provide a progress report on our research and the archival process rather than document a linear narrative of the activity at the Third Eye Centre in the 1970s.  We are therefore attempting to select items that may be agents for activating discussion around significant events and individuals and have a potential to deepen understandings of the background and motivations behind the setting up of the Third Eye Centre.

It is proving a challenge to consider which items will visually ‘work’ in a gallery context, whilst also providing interest and purpose beyond their aesthetic.  From the first Third Eye Centre logo and headed paper, hand drawn posters for poetry readings towards a new logo and rebranding in the late 1980s the development of the Third Eye Centre’s aesthetic language is illustrated through posters and ephemera. These items reflect not only the changing social tastes but the development of the Centre’s artistic direction, policies and staffing.

This poster from one of the Third Eye Centre’s first major project exhibitions with local community is an early example of this varied visual identity.

Newspaper cuttings compiled by art citric and commentator Cordelia Oliver from her time writing for Manchester Guardian are proving an insightful source for our current research on the Third Eye Centre as well as providing useful background colour on the atmosphere of contemporary art culture spanning from the 1960’s to the 1980’s.

Oliver played a key role in the set up and running of the Third Eye Centre as a member of the Directors Committee and active participant serving on the Third Eye Visual Arts Sub-Committee.  As a supporter of the centre she frequently wrote reviews of its programme, however not all necessarily full of praise as it seems she did not allow her proximity to cloud her judgement.  An extract here from an interview with founding Director Tom McGrath on his ambitions for the newly opened centre in 1975 is one particular prize for our research from this fastidiously complete yet personal collection of writing.

“When it set out on its new venture neither [Scottish Arts] Council nor Glasgow committee had any clear idea of how to shape the thing [Glasgow Art Centre].  So Tom McGrath has enjoyed the widest possible brief simply to make it work.  What does he have in mind for Third Eye, as it is now called?...’You ask what I mean to do at Third Eye? Everything I see that seems valid, ‘Put into Place and let it happen’: I think I’ll have that quotation put above the door.  The interesting thing is the coexistence of different cultures, even different approaches to the same culture.  At Blysthwood Square [previous site of Scottish Arts Council Glasgow Gallery and offices] we had art shows, concerts of baroque music, poetry readings, jazz, folk, and they all had completely different audiences.  I’d like to see some cross-fertilisation.  Third Eye may well settle in with one particular audience, but not till after I’ve left it...Let’s say I’m interested in a breakdown between compartments in the arts.  I’m interested in an international present and a local situation.  I can’t see the outcome – that’s what makes it so exciting.’”

The GSA Archives and Collections Centre has been busy these last couple of weeks with artists participating in the forthcoming CCA exhibition ‘What We Have Done, What We Are About To Do’ conducting research in the Third Eye Centre archive material, and it is becoming increasingly evident of the wealth of various and often deviant information from a linear history that the material provides.
While some of these visitors may directly reference material found within the archive, others will also explore broader discussions on the role of archives within contemporary art practice and institutions.

We have been out visiting too, and similar discussions, specifically curatorial intention in dissemination of archives, were prevalent during the recent Whitechapel event ‘Curating the Archive’.

We also visited Flat Time House, which holds a unique collection of the personal papers and work in the former studio of John Latham, an artist who networks with the Third Eye Centre through Better Books and the Artist Placement Group.  Significant evidence of direct communication between Latham and the Third Eye Centre is yet to be uncovered, but as detailed research on the first few years of the Third Eye Centre continues for the exhibition, we look forward to uncovering more tangible articles such as this carbon copy of a letter from Tom McGrath to Latham, the original of which amazingly is still currently held at Flat Time House. 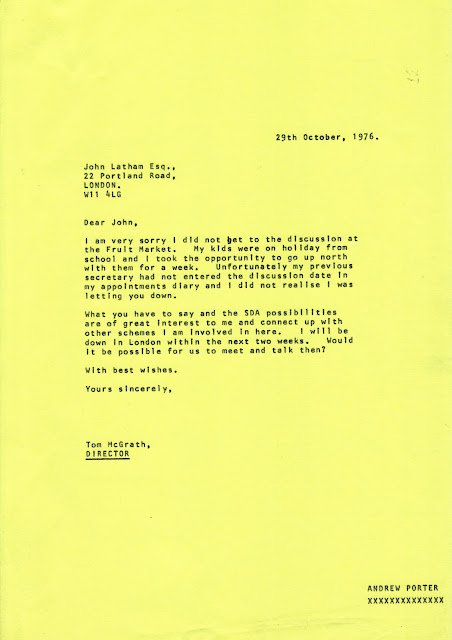 Tom McGrath was as good as his word. Shortly after returning from the Netherlands a video camera was purchased and recording began almost immediately. One early tape documents a walk around the potential site for the new arts centre - at that time a closed down and empty space. By luck, a mirror in the foyer catches McGrath filming and his wife, who carried the power pack for the camera (portable was defined slightly differently in the early days of video).

Throughout the 1970s the camera was used to document various activities in the art spaces  - both the Blythswood Square Arts Council Gallery and, more extensively, the Third Eye Centre in Sauchiehall Street. Given the social and community interests that lay at the heart of the Centre's activities, there is also substantial footage of life in the city that now may have historical and social value.

The tapes were eventually handed to Scottish Screen by Jak Milroy and later placed in the care of Malcolm Dickson at Street Level Photoworks. The AHRC award to GSA has provided funds for their digitisation which is now complete under the supervision of Rewind in Dundee. 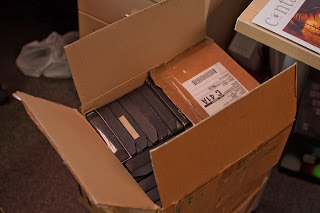 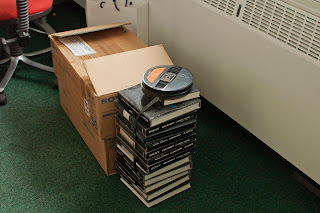